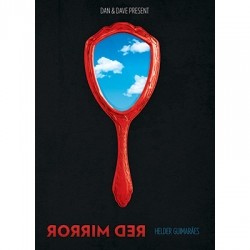 Beschreibung Bewertungen 0
Beschreibung
Learn premier card magic from a master and gain invaluable insight into the art. Red Mirror is a... mehr
Menü schließen
Produktinformationen "Red Mirror"
Learn premier card magic from a master and gain invaluable insight into the art. Red Mirror is a look inside the mind of a world-class performer and FISM champion who many consider the most important magician of his generation. Helder Guimarães is a studied practitioner of both magic and theatre with an experienced understanding of the arts. Offered on this volume is a collection of ten original card routines, but more importantly, his creative process and thinking behind each. Featured is Helder's signature card act, a formal routine developed and refined through years of performing. This act inlcudes the following routines: 4 For Four Helder Skelter The Sculpture Sloth An Invisible Thread Aberto Court Cardesian CoordinateOver 3.5 hours featuring a live performance at The Magic Castle, an interview, studio performances and explanations shot with multiple HD cameras for superior picture quality and coverage, effect commentary, bad english and more!Each routine has been broken down into its own segment and includes a separate studio performance and explanation. Helder then provides commentary after each effect, in which he discusses its development and offers ideas for you to take it further.Besides the many sleights Helder utilizes to achieve his effects, the Ascanio Spread, Stuart Gordon Double Turnover, and Elmsely Count have their own special segments and offer detailed instruction on their technique.InterviewIn this one-on-one interview, Helder discusses his background in magic and theatre, why he specializes in card magic, his thinking process, how he constructs routines, practices, and so on. Full of wonderful advice and an inspiring look into one of the most important magicians of his generation, you won't want to pass this up.2010 LectureExcerpts from Helder's 2010 Los Angeles lecture includes discussions about magic and a performance of an impossible Cards Across routine that will leave you in wonder.CreditsA reference of both sleights and effects is included as an aid for further study.ExtrasIn this section of the DVD you will discover a fun bonus effect, credits and if your lucky a couple more routines that have been hidden. Yes, these are the easter eggs you've heard about. Happy hunting!About HelderHelder Guimarães is an international award-winning magician and has been named World Champion of card magic at FISM.Born in raised in Portugal, Helder has been a magician since he was three years old. Ever since, he has thoughtfully studied, practiced, performed and loved magic. As a result, Helder truly understands the art, craft and business of conjuring. Helder holds a degree in Theater and has had several very successful theatrical shows in Portugal and Spain.He is a brilliant technician and a diabolical thinker. His magic is elegant and profoundly well constructed. Helder also happens to be a fantastic performer. He is funny, smart and relevant.Extra FeaturesMerry-Andrew'sInterviewLectureCreditsEaster EggsRunning Time Approximately: 3hrs 30min
Weiterführende Links zu "Red Mirror"
Bewertungen 0
Bewertungen lesen, schreiben und diskutieren... mehr
Menü schließen
Kundenbewertungen für "Red Mirror"
Bewertung schreiben
Bewertungen werden nach Überprüfung freigeschaltet.
Kunden kauften auch
Kunden kauften auch
Zuletzt angesehen
Diese Website benutzt Cookies, die für den technischen Betrieb der Website erforderlich sind und stets gesetzt werden. Andere Cookies, die den Komfort bei Benutzung dieser Website erhöhen, der Direktwerbung dienen oder die Interaktion mit anderen Websites und sozialen Netzwerken vereinfachen sollen, werden nur mit Ihrer Zustimmung gesetzt. Mehr Informationen
Ablehnen Alle akzeptieren Konfigurieren