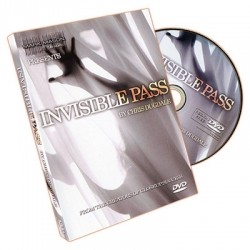 Beschreibung Bewertungen 0
Beschreibung
An incredible step by step guide to one of the most invisible pass techniques ever created!Full... mehr
Menü schließen
Produktinformationen "The Invisible Pass"

An incredible step by step guide to one of the most invisible pass techniques ever created!Full instructional DVD with Bonus tips and handlings. "The best invisible pass I've never seen, you b******"- Jerry Sadowitz - The Crimp "Many magicians perform the pass badly, clumsily or only with insane misdirection. Chris Dugdale's handling of the pass is flawless. Flaw-LESS, literally you cannot see it, even when the HD camera filming his fingers is 5 inches away during a straight on shot (at hand level NOT from above). He is someone you want to learn this sleight from, not just because he is so damned good at it, but also because he is an excellent teacher. I originally learned this move from a book and it was like trying to catch a fly in the millennium dome - it is so elusive. Using this professional DVD its more like catching a tortoise in a phone booth! Chris makes this sleight so achievable for anyone. If you THINK you do the pass well you should probably still buy this DVD!" - Daniel Alexander Running Time Approximately: 22min